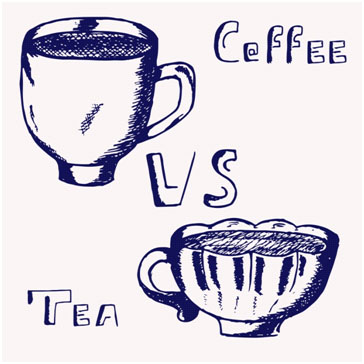 While coffee seems to be the most popular hot drink of choice for a lot of people, tea has been an institution for centuries for many reasons.

First, tea is fantastic at hydrating the body and replenishing fluid intake.

Coffee can be dehydrating and tea has the added benefit of generally being just pure H2O with that awesome tea flavor, meaning that when it’s a hot summer day, it’s much more beneficial to sip down some tea (hot or cold) as it’ll replace any fluids you’ve lost through sweating

Tea has been shown in studies to help reduce the chances of developing certain kinds of cancers and tumors. It has been linked to improving health in China dating back five thousand years.

While some say tea has less caffeine than coffee, that’s not actually true. Tea has the same amount of caffeine as coffee, and while both are stimulants, coffee is a much bigger energy reducer than tea. They’ll both give you a caffeine rush but the coffee high lasts a shorter time.

And if you are trying to keep your pearly whites – white – tea is less likely to discolor teeth as much as your daily coffee.

Last but certainly not least: tea can help strengthen your immune system. If you are fighting a bout with the flu it can hydrate you and also help flush the bug out of your system while improving your immune system for the next time you may be exposed to being infected.