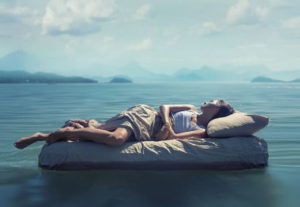 All our lives, we’ve been told over and over again that we need a solid eight hours of sleep a night, every night–absolutely and without fail. Our bodies regulate sleep in much the same way that they regulate eating, drinking, and breathing. This suggests that sleep serves a similar critical role in our health and well-being.

While getting enough sleep–and REM time in particular–is crucial for maintaining healthy body functions and giving our bodies enough time to rest, we may be sleeping much more than we need to.

Sleeping until noon on Sundays may make you feel more awake—but it won’t help you at work on Monday. A recent study by the American Academy of Sleep Medicine finds that after a week of sleep deprivation, two nights of catch-up don’t do much to improve reflexes, alertness, or attention span. In a sleep lab, 34 people snoozed 6 hours a night for six nights. As expected, scores on performance tests plummeted after the short sleep time. The next two nights, they slept 10 hours. But even though they felt more alert, their test results didn’t improve.

Medical and nutrition experts say that too much sleep may also effect moods. In many cases, oversleeping can spike negative and depressive feelings. By limiting sleep to no more than 6-7 hours a night, the individual experiences improved mood and a return to feeling like themselves.

In addition, oversleeping can stifle creativity, due to feeling sluggish and groggy upon waking. Finding a balance between over and under sleeping can provide a healthy, functional level of alertness in most individuals, as long as they are not already suffering from fatigue to begin with.

Some researchers suggest that rather than trying to get in some full, unbroken eight hours a night, a nap may be better. An hour-long nap, for example, allows the body to begin healing and recovery–and can usually work out even if squeezed in at any time we have an hour-long break between other obligations.

Naps can also address immediate feelings of fatigue and may be a better approach to dealing with chronic tiredness than long nights of sleep.

Ultimately, how much each of us sleeps must be determined on a case-by-case basis. The right number depends on our lifestyle, habits, and health. But as you go about figuring out the best balance, keep in mind that eight hours a night may not always be a good thing.