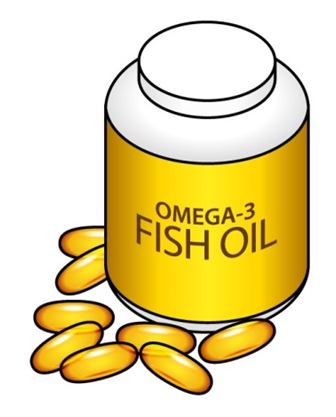 Keeping as many precious brain cells as we age and maintaining good mental health goes right along with keeping our bones and muscles healthy. While fish oils aren’t considered a replacement for the treatment of depression, poor memory or a number of other conditions, it’s possible that supplementing with omega-3 fatty acid oils may help lower the risks as well as keep a deficiency in check.

A portion of the brain is made of fish oil (as DHA and EPA) which play a host of vital roles in neuronal structure and function, protecting them from oxidative damage, inflammation, and the cumulative destruction. So it’s not surprising that consuming fish oil has been shown to reduce existing depression and help with postpartum depression, ADHD, bipolar illness and even schizophrenia. Even in healthy people, supplementing with fish oil decreases anger and anxiety and increases vigor while also improving various types of attention, cognitive and physiological functions – including overall mood. Research shows people with depression may have low blood levels of the brain chemicals called EPA and DHA of which both can be found in fish oil.

Fish oils are key in reversing brain aging due to their profound effects on structure, function, cognition and even Alzheimer’s disease prevention. And they have recently been associated with increased volume of the brain’s gray matter, especially in those regions associated with happiness and intelligence.

Supplementation and eating fish are the best ways of providing the body and brain with these healthy oils.  Fish high in omega-3s include sardines, salmon, herring, trout and white tuna. Shellfish, including mussels and oysters, also contain omega-3s. But extreme caution must be taken about the source of fish due to mercury and other toxic substances. Swordfish, tilefish and king mackerel are among those to avoid. And when taking supplements, it is important to look for ranges/ratios of 1,000-3,000 mg of EPA and 1,000-1,500 mg of DHA.